About The Dodge Dakota Connection 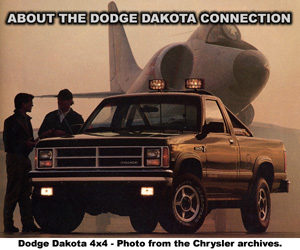 Part Of The Mopar Enthusiast Ring:

The Dodge Dakota Truck Connection is part of the internets oldest and largest Mopar Enthusiast Ring, featuring over hundreds of Chrysler, Dodge, Dodge & Ram Truck, Plymouth and Mopar sites and pages. Including a collection of Mopar related Clubs and Parts & Services sites. The mopar-ring.org server also hosts some other cool Mopar related resources. Including a Classifieds section, Photo Gallery, Screensaver section and a news section.

About The Dodge Dakota:

Introduced in 1986 as a 1987 model, the Dakota was a true mid-size pickup truck from Chrysler’s Dodge Truck division. The Dakota pickup featured a conventional design with body-on-frame construction and a leaf spring/live axle rear-end. The Dakota was larger than other compact truck’s including the Chevrolet S-10 and Ford Ranger but below the full-size Ram pickups. A range of engines were offered over the years including straight-4’s, V6’s and later V8’s. The Dakota was available in either 2 wheel drive or 4×4 configuration. Only regular cabs were offered at first with Club and Quad cabs being added over the years.

The Dodge Dakota offered truck buyers the nimble handling and fuel economy of a compact pickup with cargo handling capacity approaching that of full-sized trucks. The Dakota was the first small pickup with an optional V8 engine.

The Dodge Dakota was a very popular pickup and sold millions over the years, Dakota truck’s have been used by police and fire departments, as off-road vehicles, patrol cars, monster trucks, pulling trucks and more. In 2010, the Dakota is was added to the Ram Brand truck lineup. The Dakota was discontinued in 2011, with the last one being built on August 23, 2011, ending the truck’s 25 year production run.